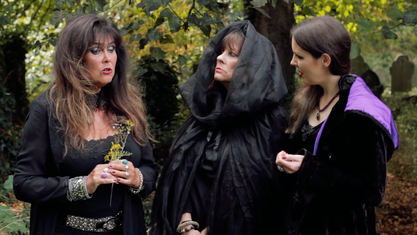 Caroline Munro, Judy Matheson and Emma Dark in FRANKULA
Relatively new to acting and presenting Emma quickly built up a diverse portfolio after playing a lead part in Kim Wilde's horror themed music video "Every Time I See You I Go Wild"  (2013). Further on in 2013 and into 2014 she went on to interview  a range of  well known horror and paranormal guests for her own web series "Frights and Delights", as well as starring and performing in two further music videos for alternative band X-KiN.

2015 saw Emma starring in both of her own short films, playing the lead part of the revenge driven vampire EVA in "Seize the Night", and the role of JEANNIE in "Island of the Blind Dead". Later in 2015 Emma landed a supporting role in Dan Brownlie's shock horror "Two Girls One Victim", which forms part of Shane Ryan's "Face's of Snuff". In addition Emma narrated a storytelling based segment in Richard Gladman's "Fragments of Fear", alongside cult horror stars Caroline Munro and Francoise Pascal.

2016 saw Emma take on a secondary lead role in her new short film "Salient Minus Ten", and a lead role in Misty Moon/Robo Films "Frankula" - which is  written by and stars David Barry (Please Sir!), and also stars Caroline Munro (Maniac) and Judy Matheson (Twins of Evil), with a voice over from Fenella Fielding (Carry on Screaming!).

Emma recently played the lead role of 'The Countess'  in horror short film "Umbilichord" (2018), which was written and produced by 1i2c, and directed by award-winning director Nicolai Kornum. "Umbilichord" will see it's big screen festival premiere in June, with details to be announced shortly.